The Flemish Memory Studies Network coordinates research and graduate teaching activities at Ghent University and KU Leuven. Ghent University’s Cultural Memory Studies Initiative (CMSI) brings together scholars from across the humanities whose research revolves around memory and trauma as mediated through culture. Founded in 2007 as the Centre for Literature and Trauma (LITRA), CMSI assumed its current name in 2014 to reflect the widening scope of its members’ research interests. Cross-cultural and cross-disciplinary in orientation, CMSI is one of the most vibrant research initiatives in memory and trauma studies in Europe. Among other memory studies activities, KU Leuven’s Department of Literary Studies is at the centre of the international research project TRANSIT, co-funded by the Marie Curie Actions International Research Staff Exchange Scheme, which investigates the transnational dynamics of memory in Hispanic and Latin American culture.

Stef Craps is a professor of English literature at Ghent University, where he directs the Cultural Memory Studies Initiative. His research interests lie in twentieth-century and contemporary literature and culture, memory and trauma studies, postcolonial theory, and ecocriticism and environmental humanities. He is the author of Postcolonial Witnessing: Trauma Out of Bounds (Palgrave Macmillan, 2013; paperback 2015) and Trauma and Ethics in the Novels of Graham Swift: No Short-Cuts to Salvation (Sussex Academic Press, 2005), and the editor, with Lucy Bond and Pieter Vermeulen, of Memory Unbound: Tracing the Dynamics of Memory Studies (Berghahn, 2017; paperback 2018). He has also guest-edited two special issues of Studies in the Novel, on climate change fiction (with Rick Crownshaw) and postcolonial trauma novels (with Gert Buelens), and one of Criticism: A Quarterly for Literature and the Arts, on transcultural Holocaust memory (with Michael Rothberg). His next book project is an introductory guide to the concept of trauma for Routledge’s New Critical Idiom series (with Lucy Bond). He is currently also guest-editing a special issue of American Imago on ecological grief. 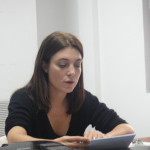 Silvana Mandolessi is Assistant Professor of Cultural Studies at the University of Leuven, Belgium. She is the author of Una literatura abyecta: Gombrowicz en la tradición argentina (Brill, 2012) and a co-editor of Transnational Memory in the Hispanic World (a special issue of the European Review, 2014), El pasado inasequible: Desaparecidos, hijos y combatientes en el arte y la literatura del nuevo milenio (Eudeba, 2017), and Sujetos, territorios y culturas en tránsito: Dimensiones de lo transnacional en la cultura hispánica contemporánea (a special issue of Nuevo Texto Crítico, 2017). She is currently Director of the ERC Starting Grant Project “We Are All Ayotzinapa: The Role of Digital Media in the Shaping of Transnational Memories on Disappearance” about digital memory as a new configuration of memory in post-scarcity culture.

is Assistant Professor of American and Comparative Literature at the University of Leuven, Belgium. He works in the fields of critical theory, the contemporary novel, and memory studies. He is the author of Romanticism after the Holocaust (Continuum/Bloomsbury, 2010 and 2012) and Contemporary Literature and the End of the Novel: Creature, Affect, Form (Palgrave Macmillan, 2015), and a co-editor of, most recently, The Institutions of World Literature (Routledge, 2015) and Modern Creatures (a special issue of the European Journal of English Studies, 2015).

Founded in 1817, Ghent University is one of the leading institutions of higher education and research in the Low Countries. Located in the heart of Flanders, the Dutch-speaking part of Belgium, the university currently employs 7,100 faculty and staff and has a student body of 32,000, of which approximately 3,000 are foreign students. The university provides excellent training opportunities to junior researchers through its five Doctoral Schools and awards around 400 PhD degrees per year, of which over 20% go to international researchers.

The University of Leuven was founded in 1425, and with over 31,000 students and 8,000 employees, it remains one of the most important research and higher education institutions in the Low Countries. The university is composed of fourteen faculties, fifty departments, and about 240 sub-departments.