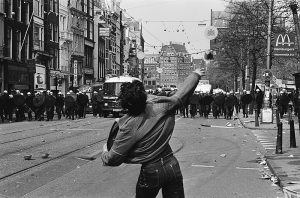 Utrecht University
Keynotes and panels will take place in the Sweelinckzaal, Drift 21, Utrecht

Marianne Hirsch and Ayşe Gül Altınay will talk about the shared journey that produced their co-edited volume Women Mobilising Memory, which appeared this summer with Columbia University Press. Their presentation will also be the European launch of their book.

Lorenzo Zamponi: Memory in Action: Reflections on the Role of the Past in Social Movements

Collective action does not take place in the void, but in an environment that is materially and symbolically structured by many factors, among which the role of the past has been traditionally overlooked. Social movements are not born of immaculate conceptions, but they are often the outcome of long chains of continuity and abeyance. Furthermore, activists can rarely ignore the traces of the past that populate the public sphere and the geographic and cultural setting in which they are situated. To the contrary, the strategic choices of which social and political mobilisation is made are often rooted in a temporality that goes way beyond the short lifespan of a wave of mobilisation. Movements’ outcomes and consequences tend to objectify and persist, influencing collective action years and decades after the end of a cycle of protest. Memory, both in the form of explicit representations of the past and through routines and habits that are so deeply embedded in the movement culture to become invisible, plays a significant role in the shaping the identity and the choices of social movements.

This lecture analyses the relationship between social movements and collective memories: how do social movements participate in the building of public memory? And how does public memory, and in particular the media’s representation of a contentious past, influence strategic choices in contemporary movements?

Lorenzo Zamponi is an assistant professor of sociology at the Scuola Normale Superiore in Florence (Italy), where he is part of the COSMOS (Centre on Social Movement Studies) research team. He holds a Ph.D. in Political and Social Sciences from the European University Institute. He has worked on research projects on student movements, youth political participation, the economic crisis and solidarity with refugees. His research interests include memory, contentious politics and media analysis. He is author of two monographs (Social Movements, Memory and Media: Narrative in Action in the Italian and Spanish Student Movements, 2018, Palgrave, and Resistere alla crisi. I percorsi dell’azione sociale diretta, with Lorenzo Bosi, 2019, Il Mulino) and of several peer reviewed articles in international journals and book chapters, focusing mainly on the recent wave of anti-austerity protest in Europe, on the cultural elements of social mobilization, and on the emergence of non-protest based forms of collective action.

Reflecting on the shared journey that produced our recent co-edited book Women Mobilizing Memory, we aim to conceptualize the interventions the process and the essays themselves make in memory studies.  By way of stories that illustrate our feminist collaborative practice, we will focus on several key concerns in the field: mnemonic sites and itineraries, transculturality, gender, art and activism, the future.

Marianne Hirsch writes about the transmission of memories of violence across generations, combining feminist theory with memory studies in global perspective. Her recent books include The Generation of Postmemory: Writing and Visual Culture After the Holocaust (2012); Ghosts of Home: The Afterlife of Czernowitz in Jewish Memory (2010) and School Photos in Liquid Time: Reframing Difference (2019), both co-authored with Leo Spitzer; and the co-edited volume Women Mobilizing Memory (2019). A co-founder of Columbia University’s Center for the Study of Social Difference, Hirsch teaches comparative literature and gender studies at Columbia . She is former president of the Modern Language Association of America and a Fellow of the American Academy of Arts and Sciences.

Ayşe Gül Altınay is Professor of Anthropology and the Director of Sabancı University Gender and Women’s Studies Center of Excellence (SU Gender). Her research and writing have focused on militarism, violence, memory, gender and sexuality. Among her books are The Myth of the Military-Nation: Militarism, Gender and Education in Turkey(2004), Violence Against Women in Turkey (2009, with Yeşim Arat), The Grandchildren: The Hidden Legacy of “Lost” Armenians in Turkey (2014, with Fethiye Çetin), Gendered Wars, Gendered Memories: Feminist Conversations on War, Genocide and Political Violence (2016, co-edited with Andrea Petö) and the forthcoming volume Women Mobilizing Memory (co-edited with Maria Jose Contreras, Marianne Hirsch, Jean Howard, Banu Karaca and Alisa Solomon).

Wulf Kansteiner Memory, Right-Wing Politics, and the European Election of 2019

The rise of the right across Europe is facilitated by complex memory politics. The right champions various forms of nationalism allegedly remembered in absentia and distributed through successful digital media strategies. That nationalism touches upon traditional sites of memory and, more importantly, builds up a compelling short-term memory of the movement itself replete with phrases, rituals, and images of party lore. Moreover, the consistent nationalism advocated by the right coincides with a significantly weakened official cosmopolitan memory which is in decline all across Europe. The transition of WWII from communicative to cultural memory has reduced attachment to the Holocaust narrative. In addition, the dynamics of digital media tend to fragment public discourse, allegedly creating self-serving echo chambers of political bias, on the one hand, and highly emotional and divisive arenas of political confrontation, on the other, thus destabilizing the previous cosmopolitan consensus. These hypotheses deserve to be put to the test by analyzing the political discourse and memory regimes constructed by political parties via the web and social media platforms in the run up to the elections in spring of 2019. The analysis suggests that radicalization, balkanization, and historization of memory cultures contribute to the malaise but that cosmopolitan memory has also fallen victim to its own contradictions and lack of democratic and emotional legitimacy. Moreover and most disturbingly, the images and narratives of cosmopolitan memory have been coopted for the purpose of providing memory plausibility to the nationalistic project of ending immigration to Europe. In the end, right wing politicians even struck a compelling pose as the only true internationalists of European politics.

Wulf Kansteiner is professor of history at Aarhus University, Denmark. A cultural and intellectual historian of twentieth-century Europe, Kansteiner has published in the fields of media history, memory studies, historical theory, and Holocaust studies. He is the author of In Pursuit of German Memory: History, Television, and Politics after Auschwitz (2006 ) and coeditor of The Politics of Memory in Postwar Europe (2006), Historical Representation and Historical Truth (2009), Den Holocaust erzählen: Historiographie zwischen wissenschaftlicher Empirie und narrative Kreativität (2013), and Probing the Ethics of Holocaust Culture (2016). He is also co-editor of the journal Memory Studies.